Memory manufacturer Team Group has announced that it has prepared the first industrial DDR5-5600 memory modules. The company claims in its whitepaper that the new RAMs are a good option for next-gen platforms like “Intel Raptor Lake and AMD Raphael-X”. We’ve been talking about the 13th Gen Raptor Lake platform for a long time already. What’s interesting here is the “Raphael-X” processors that have never been officially heard of before.

As you know, AMD used the name Milan-X after integrating 3D V-Cache technology into its EPYC Milan processors. Now we have learned for sure that the desktop Ryzen 7000 series will be supported with 3D V-Cache in the future. Some sources say that the Raphael-X is already in mass production. 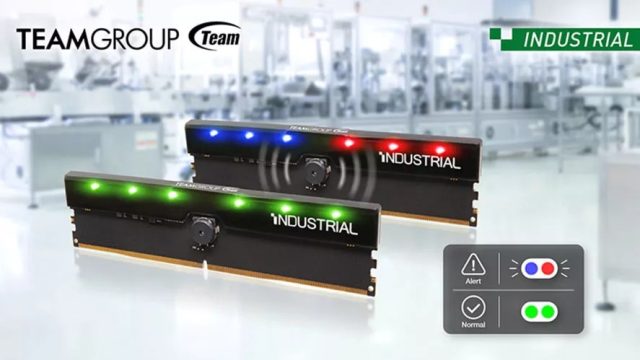 Team Group’s new DDR5 memory modules will be available in U-DIMM, SO-DIMM, ECC-DIMM and R-DIMM form factors. The RGB lighting used for ‘industrial’ components can look odd. But these multi-colored lights will likely be used for alerts and other useful feedback.

Three RGB lighting modes are available in upcoming memory modules; Warning, Notification and Reminder. In the photos we can see that a normally working DIMM will work together with the green LEDs. But if something triggers the smart detection system, the dual color RGB LEDs will start to light up. It should also be noted that the memories can make audible warnings in case the modules disappear. In other words, a small speaker (piezo buzzer) that can make ‘beep’ sounds is placed on the RAM surface.