Home Other AMD Might Be Working On Its Own Tensor Core

AMD software engineers have started rolling out new updates for the GFX11 architecture, also known as RDNA 3. A recent patch shows that AMD has crafted its own instruction set architecture that can run on matrices.

AMD may be working to hardware support advanced AI algorithms such as modern super-resolution technologies with the upcoming RDNA 3 architecture. As you know, this architecture will first be used in Radeon RX 7000 series graphics cards. 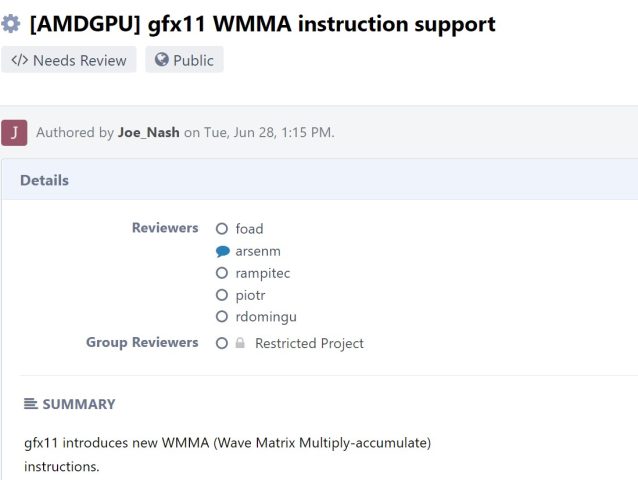 Based on the discoveries made in AMDGPU projects, Wave Matrix Multiply-Accumulate support has been added to the GFX11 architecture. These commands will work on matrices as the name suggests. Such data is heavily used by AI/ML algorithms to calculate large sets of numbers.

The red team actually started to offer support for matrix operations with the CDNA architecture. An instruction set known as MFMA (Matrix-Fused-Multiply-Add) is supported by this computation-oriented architecture. The difference is in the supported matrices and output formats. Published codes for AMDGPU show that WMMA only supports 16x16x16 matrices and data types like FP16/BF16.

// WMMA (Wave Matrix Multiply-Accumulate) intrinsics
//
// These operations perform a matrix multiplication and accumulation of
// the form: D = A * B + C .

All the different terms aside, AMD is apparently preparing its own super-resolution technologies powered by artificial intelligence algorithms. In other words, the company may be working on its own Tensor cores. It is said that the solution named “AMD WMMA” may be compatible with NVIDIA’s Tensor solution. Otherwise it will become just another proprietary technology powered only by AMD’s own GPUs.