AMD has released an Adrenaline driver with version “22.6.1” to solve the problems experienced when using the next generation Radeon RX 6000 series graphics cards in Windows 7 systems. This older version also supports Radeon GPUs dating back to the HD 6000 series (2010) unlike the newer generation drivers.

You may be questioning why AMD released a driver for Windows 7 in 2022. General support for Windows 7 ended in January 2020, but this legacy operating system still has a significant number of users and some still get paid support (via ESU) from Microsoft. Therefore, some users may be insistent on Windows 7 and may want to take advantage of the new generation GPUs. In the meantime, let’s point out that the Windows 7 ESU (Extended Security Updates) support is not endless; Microsoft will stop the extended service in January 2023.

On the other hand, later in the release notes, we see that AMD has prepared a special version of the new Windows 7 driver for Radeon RX 6400 and Radeon RX 6500 XT users. In other words, a separate driver is offered for the RX 6400 and RX 6500 XT, as well as the old generation GPUs.

Existing Windows 10 and Windows 11 Radeon drivers support, finally, the Polaris family. In other words, up-to-date Adrenaline drivers cannot be installed for those prior to the Radeon RX 400 series released in 2016. The newly released version 22.6.1 is available for past GPUs. In addition, a separate Adrenalin 22.6.1 Legacy version has been released for those who use old generation graphics cards with the Windows 10 operating system. 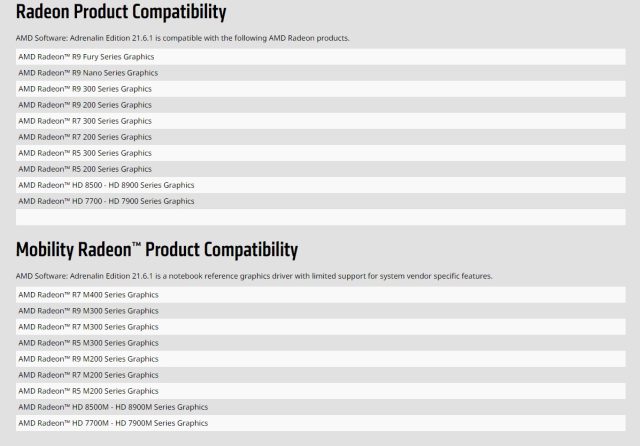