Full disk encryption is a serious obstacle for IT professionals. When computers with encrypted system volumes are compromised, it is not possible to advance research without breaking the encryption. Traditionally, experts first extract the hard disks and take the disk images and work on it. However, booting the computer via a USB stick is also sufficient to crack the entire disk encryption. Thanks to the tools produced by Elcomsoft, it is possible to obtain the keys used for encryption and even to obtain these keys easily by using the system files for the partitions that are not installed.

When the system directory is encrypted, there is nothing to do but break the encryption. Elcomsoft System Recovery, tries various methods to recover the startup password, and can obtain the encryption keys that protect encrypted directories in minutes using the system’s hibernation file.

This method is especially useful for devices that use non-removable, soldered or non-standard storage areas such as ultrabooks, laptops, Windows tablets. Experts can obtain the necessary information for an attack on encrypted volumes with a few clicks.

Elcomsoft System Recovery offers a high level of compatibility and security for all these processes. Licensed Windows PE It provides full hardware compatibility using the environment and boot support for protected systems with secure boot feature. Moreover, it provides the opportunity to obtain forensically logical data by connecting to disks and storage units only with read mode during operations.

You only need a small piece of the encrypted volume to obtain the information that will be used to crack the original passwords. You can unlock Windows accounts and access encrypted volumes by booting the system from Windows PE USB stick and using Elcomsoft System Recovery tool. Moreover, the tool also provides convenience for you to easily create a USB memory.

There are two different methods you can use to access the required information.

Encrypted volumes are designed to withstand attacks on their passwords. However, the frequently preferred BitLocker device encryption does not use a password, although it offers full disk encryption. Since obtaining passwords by brute force is time consuming, different methods have been introduced.

All encrypted volumes also have a vulnerability feature. OTFE (on-the-fly encryption) keys are binary keys used by the system to encrypt and decrypt data during normal operations. Keys are stored in the system’s short-term memory while the encrypted data is read and written. It is also possible to obtain these keys using the Elcomsoft Forensic Disk Decryptor tool.

When the user puts their computer to sleep (rather than shutting it down), Windows goes into a so-called hybrid sleep mode. During this sleep, Windows saves the short-term memory to the computer’s hard disk. Thus, the saved state can be recovered from power failure. At the same time, the computer’s RAM chips continue to draw power to hold data. If power is not lost during sleep, the computer resumes almost instantly. However, when the battery is exhausted or there is a power outage, Windows loads the saved RAM content onto the hard disk. This loaded file is also called hibernation file. Windows stores this file as “hiberfil.sys”. This file is encrypted, but it is possible to break this encryption.

To obtain the hibernation file of the system, perform the following steps:

The traditional approach is to disassemble and image the computer and then the storage devices. However, only a few kilobytes worth of cryptographic metadata are required for an attack. Obtaining this metadata can be achieved quickly without removing all hard drives.

Elcomsoft System Recovery allows to provide read-only access to the computer’s storage devices by booting with a USB memory stick. The tool automatically detects all disk encryption for all internal and removable drives. It then obtains the encryption metadata needed to perform a brute-force attack on the original password of the encrypted disk volumes. Performing dictionary-based attacks with the Elcomsoft Distributed Password Recovery tool can also speed up your work, as encrypted volumes are designed to make attacks on passwords very slow.

Since TrueCrypt and VeraCrypt use similar formats, it is not possible to separate these tools from each other. Unfortunately, the two tools take quite a different route when it comes to password cracking, so it is necessary to specify the right tool before attacking the password.

Additionally, TrueCrypt and VeraCrypt allow users to choose between several encryption algorithms. Each algorithm can optionally be arranged with the desired number of repetitions. If the user has specified a non-standard repeat number, you will not be able to obtain the password without knowing this number. Trying all possible combinations will also increase the attack time a lot.

If you successfully find the password, you can mount the encrypted partitions or decrypt them for offline analysis using the Elcomsoft Forensic Disk Decryptor tool.

If you are analyzing an active system and the user is logged into the system, OTFE keys can be obtained by making a short-term RAM backup. To get the RAM image, you need to run the Elcomsoft Forensic Disk Decryptor tool on the user’s active system. The user account must be logged in and the account must have administrator rights.

But the analysis of active systems is dangerous. While Elcomsoft System Recovery operates in safe and read-only mode, active system analysis works in the opposite direction.

To obtain the RAM image, install the Elcomsoft Forensic Disk Decryptor tool on the USB stick and connect the USB memory to the target system and ” dump physical memoryCheck the ” option. 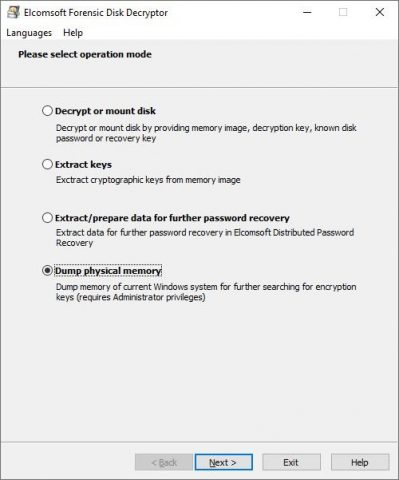 Then specify the location where the RAM image will be saved and start the transfer process. You can use Elcomsoft Forensic Disk Decryptor tool to obtain OTFE keys.