Home Other Everything You Need To Know About Ryzen 3000

AMD’s new processors will be used in the new PlayStation 5. Sony stated that it will use a custom-made, 7nm AMD Ryzen Zen 2 and Radeon Navi architecture graphics card. So what do Zen 2 processors offer?

Zen at a Glance 2 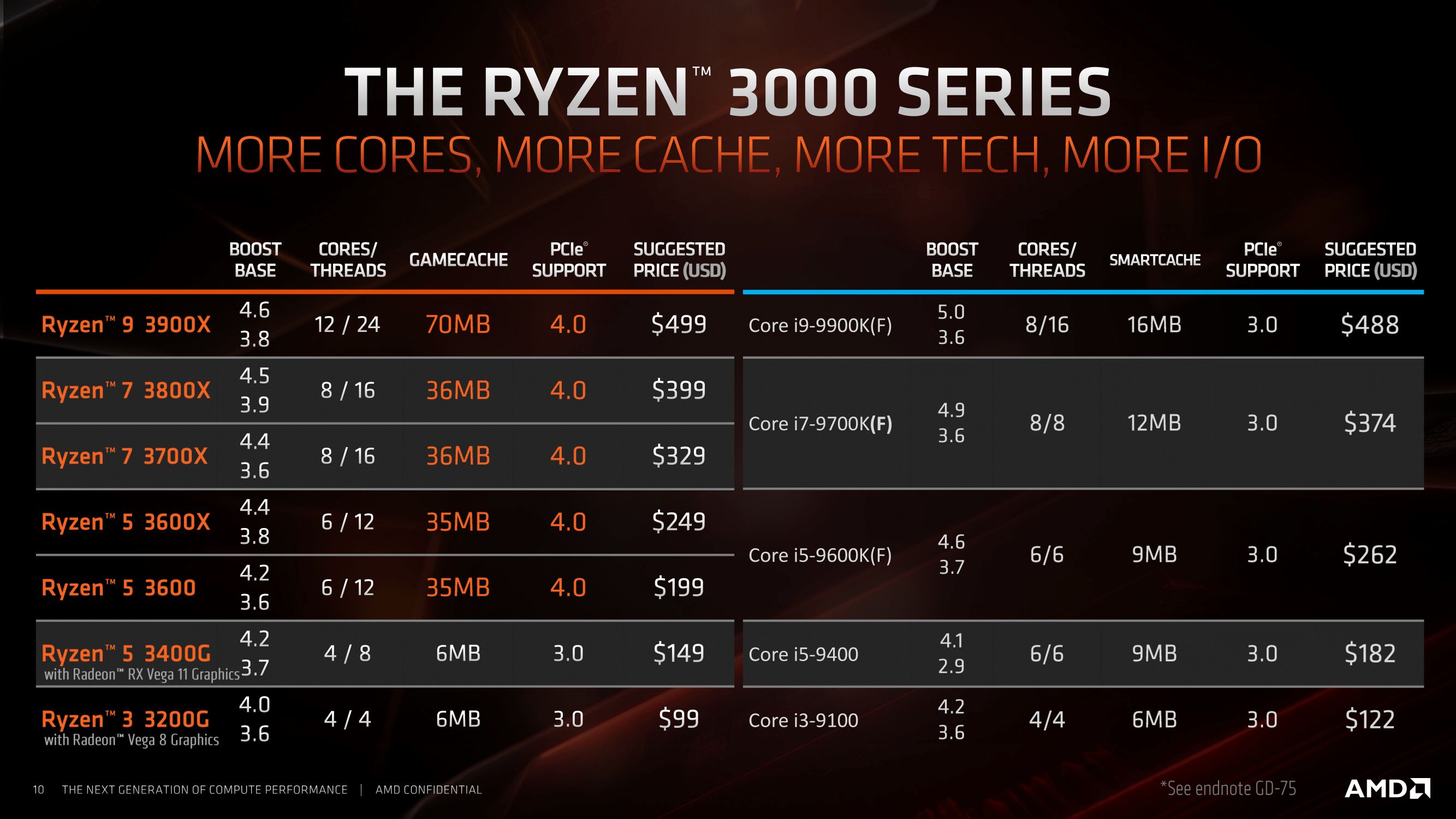 When the AM4 platform first appeared, it was produced with 28nm production technology, and at that time, the company did not have a chiplet design in mind. It contained both the processor and memory controller in a single chip.

With the new processors, AMD has now moved the memory and I/O controller to a separate chip. This was made possible by the Infinity Fabric technology that the company had previously placed in the processor. Thanks to the new I/O chip in question, the company both reduces memory latency and can support higher memory frequency.

With the increasing number of cores in the following years, the chiplet design emerged. This new approach, referred to as Multi-Die Packaging, was essential to exceed the cost limits posed by SOCs.

With Zen 2, an even more different design is now coming. The 12nm I/O chip (X570 14nm) manufactured by Global Foundaries is used in the same processor as the Zen cores manufactured by TSMC. Afterwards, both chips are connected with Infinity Fabric. We see that the processor cores are also divided into two parts here. With two chips, each with eight cores, AMD is able to produce a 16-core processor with the size advantage of 7nm manufacturing technology.

Thanks to 7nm, AMD can fit twice as many transistors in the same space as 14nm. This means more cores in the same processor size.

In addition, with 7nm, power consumption is also reduced. In this way, the company can put a 16-core processor on the table with an incredible TDP of 105W. 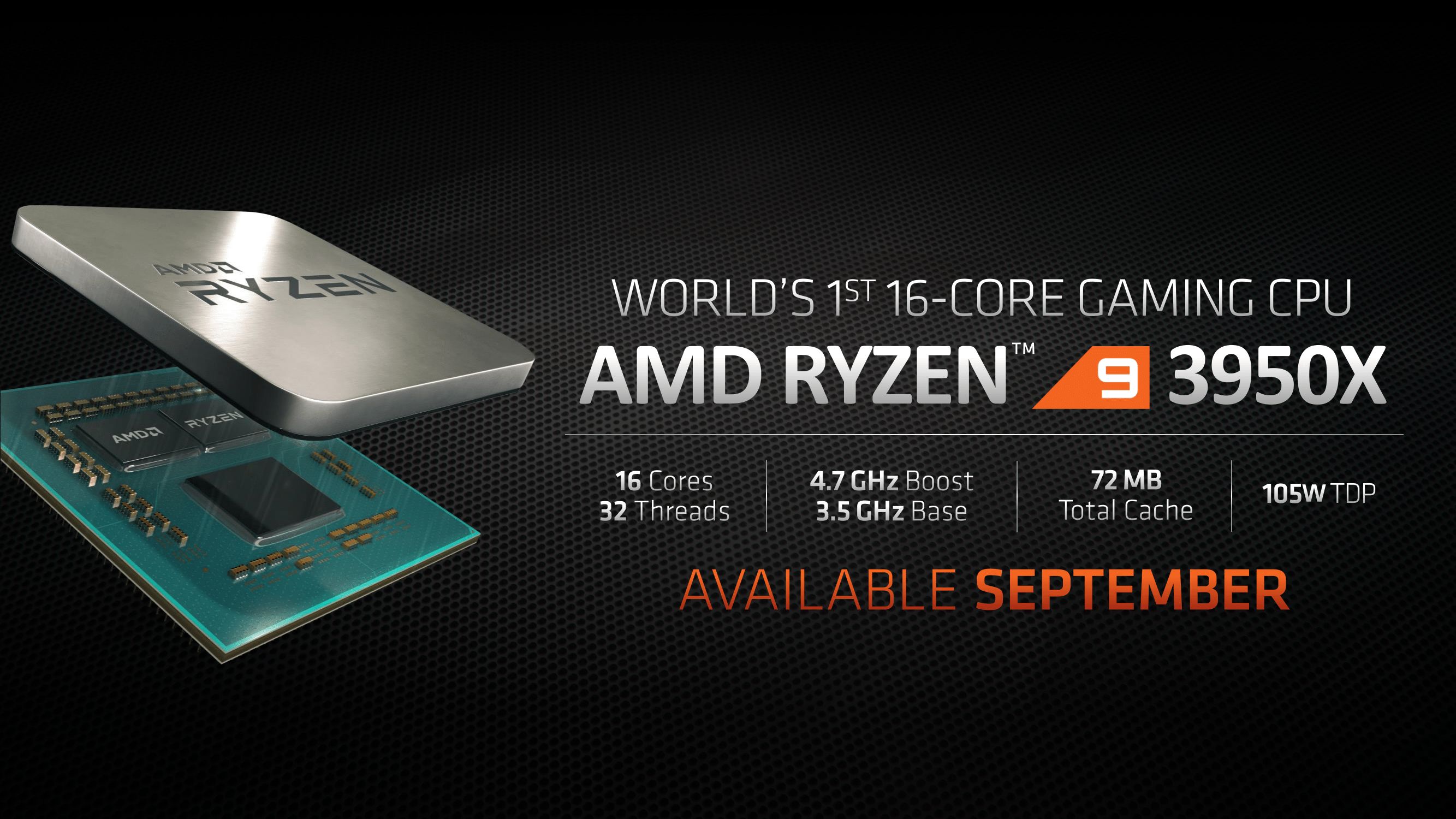 With its Zen 2 architecture, the company also increases performance per clock beat. In this context, the Ryzen 3000 series offers 15% higher IPC performance than the previous generation. The company states that it will continue this increase every two years.

Along with Zen 2, AMD also doubles the cache of processors. In addition, the company has improved the processor’s instruction set prediction ability. Floating-point computing performance has been doubled for higher performance in content creation.

We mentioned that AMD has increased single-core performance. The reflection of this on the games was also instantaneous. The company can now directly face the 9900K and get ahead of it in the scores.

AMD: We didn’t put Intel’s Specter and Meltdown performance drops in the tests. In AMD tests, the 1903 version has no advantages either. The difference will be even higher. 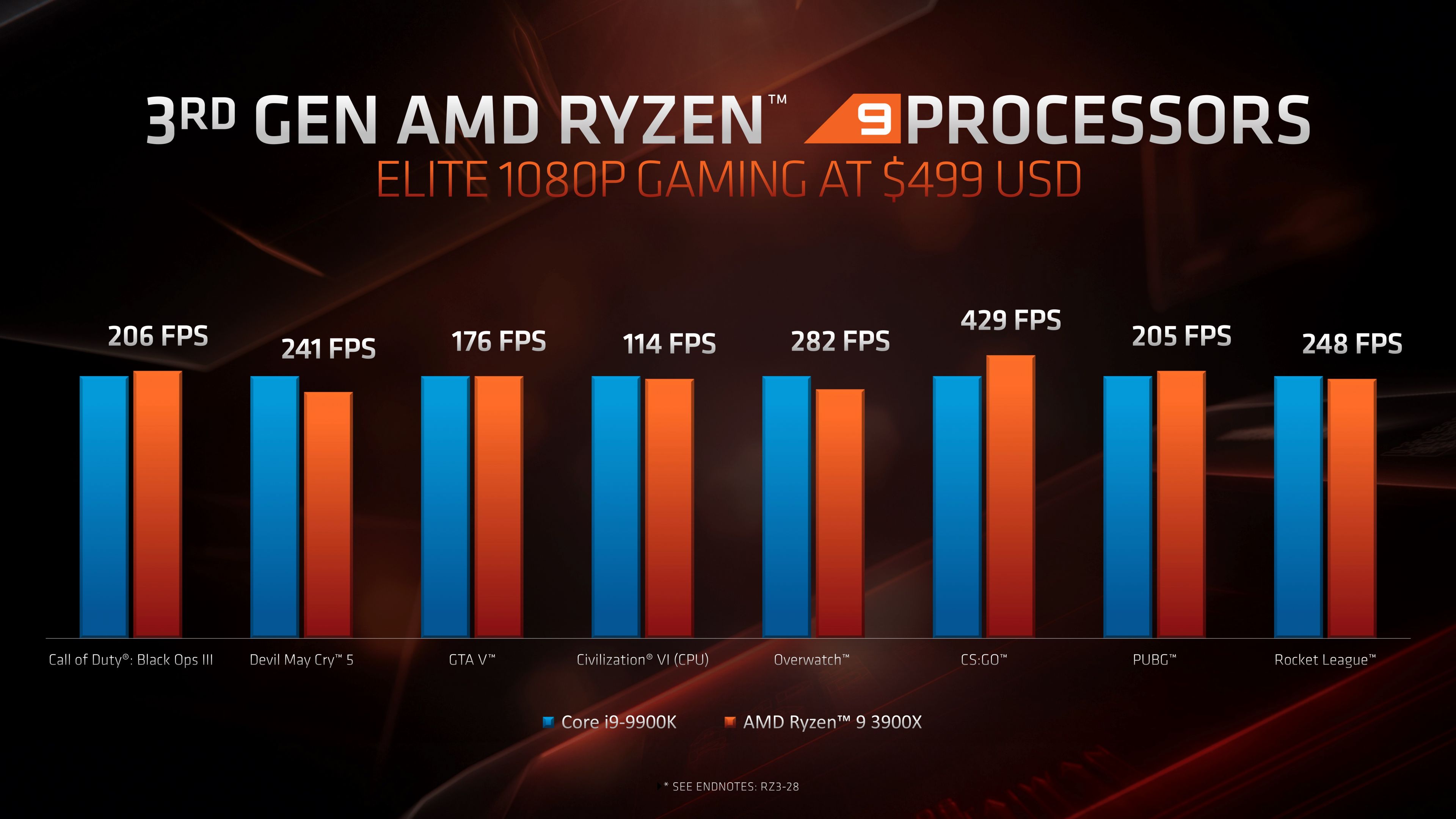 AMD’s biggest bomb with Zen 2 was undoubtedly the Ryzen 9 3950X. This 16-core processor has no competitor on the LGA 1151 platform on the Intel side. In this context, we can say that AMD made history with this huge increase in the number of cores.

With Zen 2, AMD’s processors no longer have a known security vulnerability. All hardware vulnerabilities are closed. 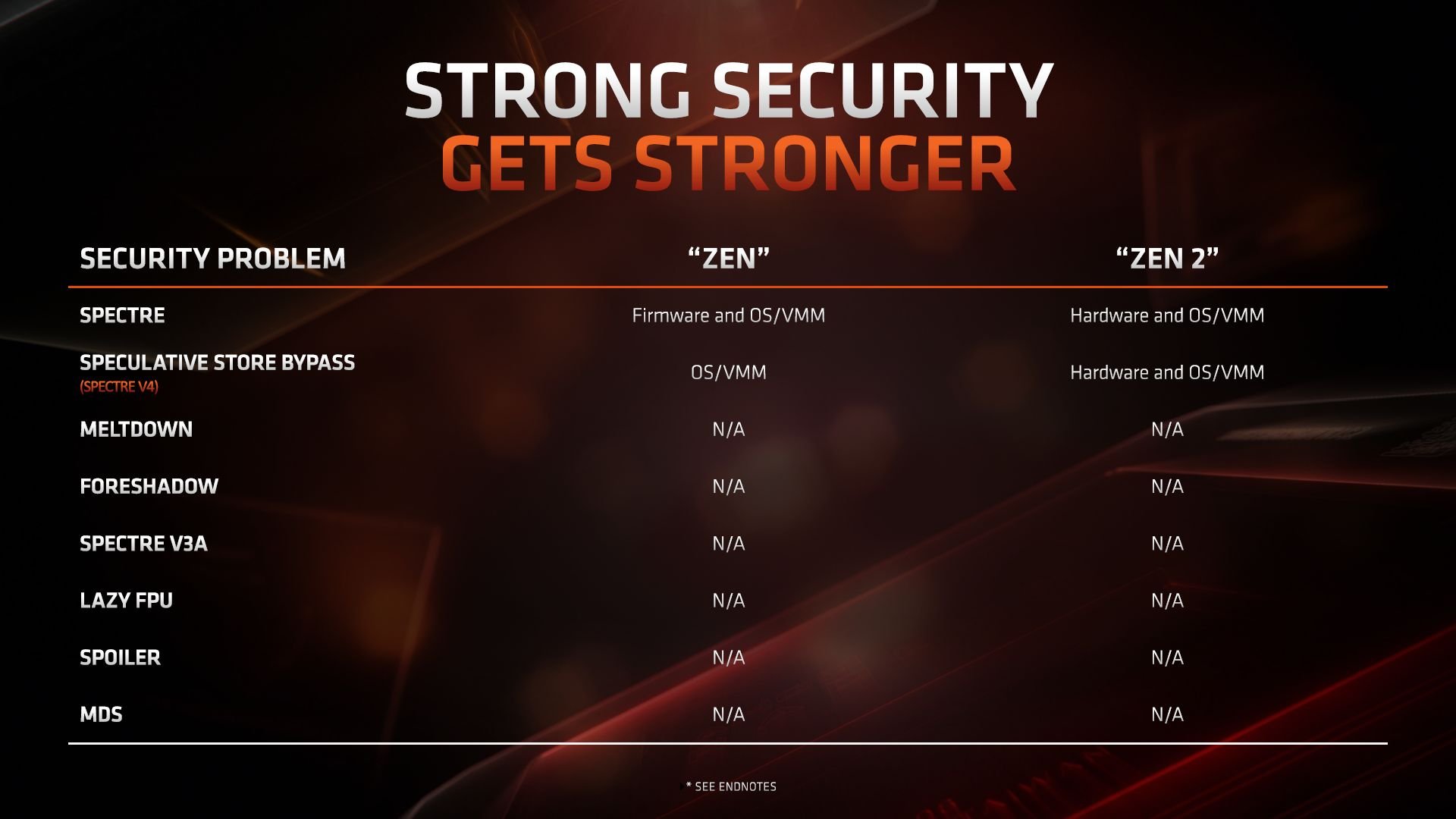 One of the biggest innovations AMD has introduced with the Ryzen 3000 is PCI Express 4.0 technology. PCI Express 4.0 offers twice the performance of 3.0, paving the way for next-generation SSDs.

Due to the high PCI Express 4.0 requirements, AMD has chosen to use new materials here. The company profited from this risky transaction: The world’s first PCI Express 4.0 supported platform.

With the Ryzen 3000, AMD has also improved memory access. Compared to the previous architecture, Zen 2 processors can access memory 33ns earlier. Standard memory support is now 3200 MHz. 3733 MHz is AMD’s recommendation. Going above it will split the memory frequency in half, which will increase the latency. 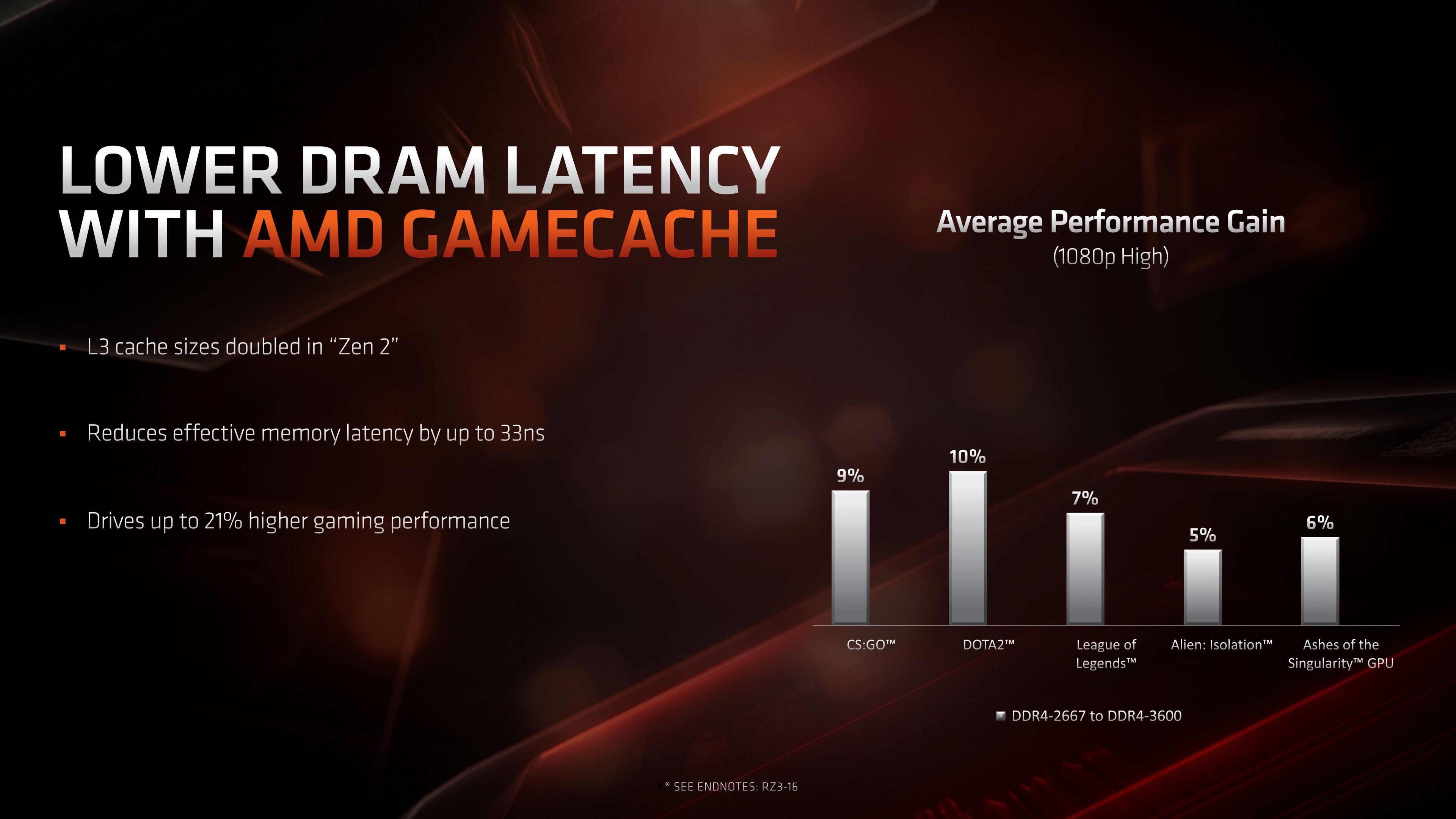 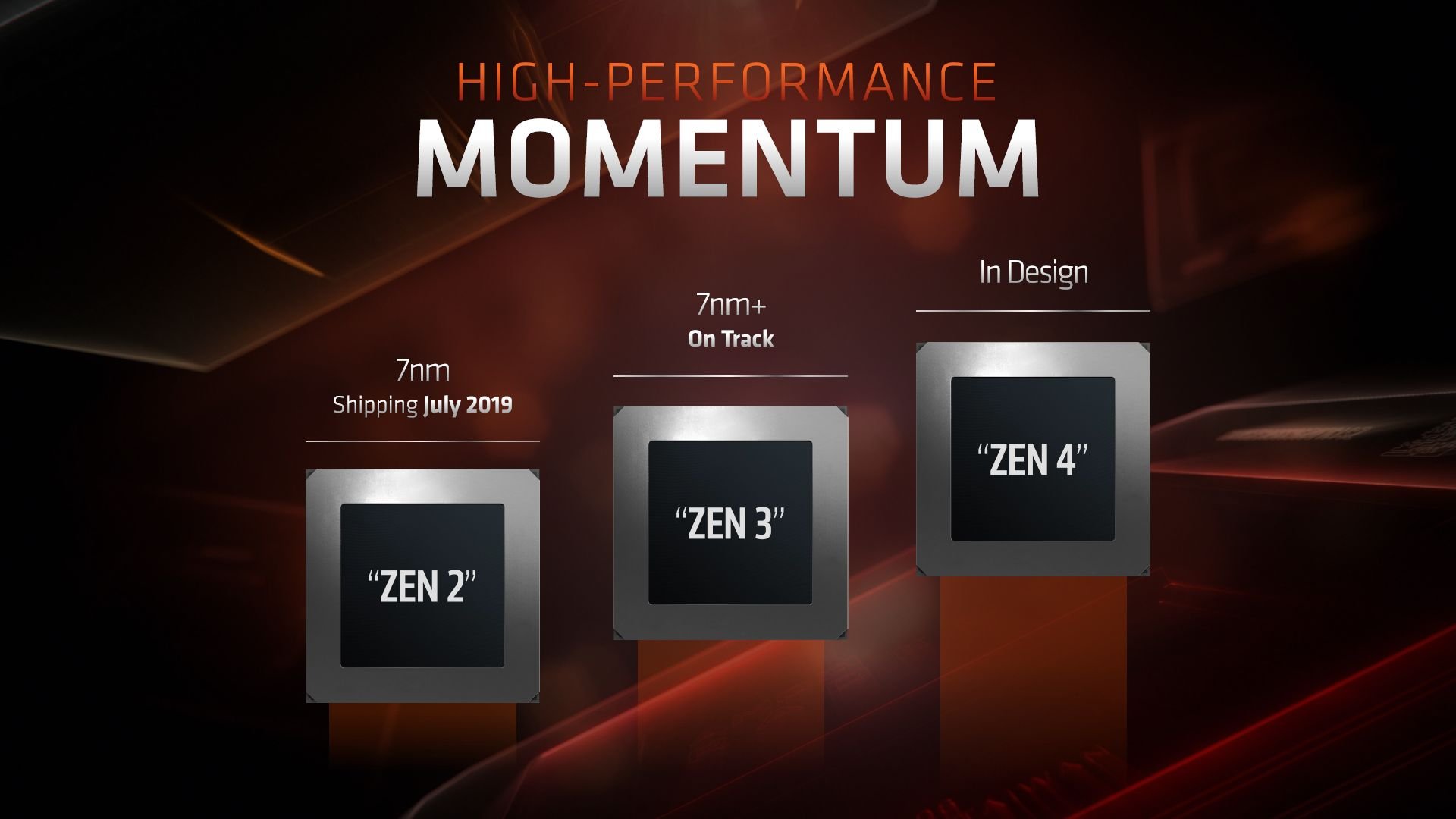 As AMD stated, the new Windows 10 1903 version includes optimization for Ryzen 3000 processors with Zen 2 architecture. In this way, the clock frequency selection time is reduced from 30ms to 1-2ms. This means a 20-fold increase.

When we look at real-world tests, for example, we see an incredible 18% performance increase at 1080p in Rocket Leage. 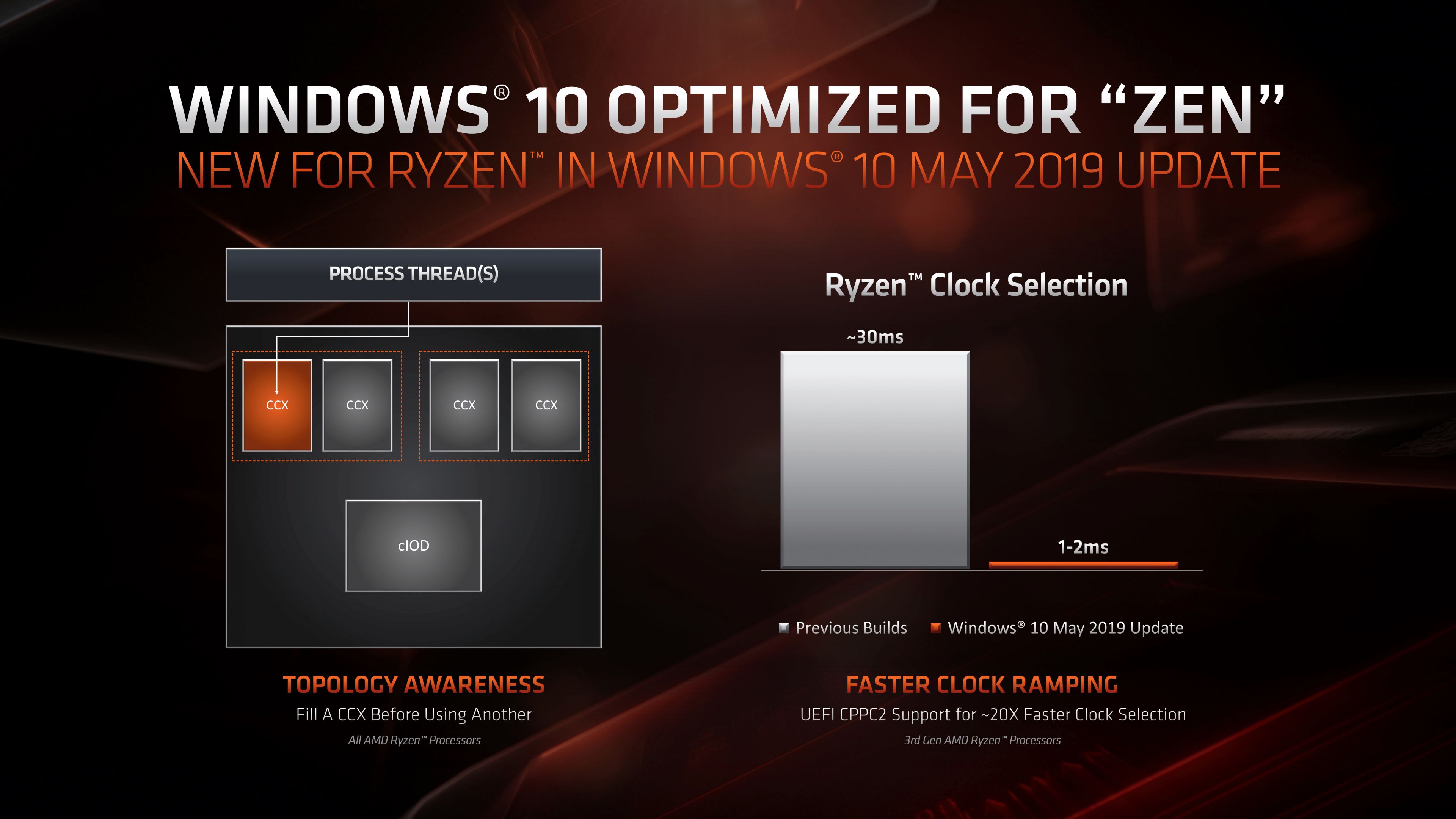 You could always get higher frequency if you had better cooling. With Precision Boost Overdrive, you can now use the automatic overclocking feature through Ryzen Master.

First of all, AMD offers us two models, 3200 G and 3400G. On the other hand, both are based on Zen+, not Zen 2. Frankly, we would like the company to make the naming accordingly.