Just days after the Honor 20i launch in China, Huawei’s sub-brand has released the Honor 20i Aape Special Edition for 2199 yuan (1906 TL). Already, the company had confirmed that they were collaborating for the special edition device at the event where the Honor 20i was introduced.

The phone, which offers two different color options, Jungle Powder and Magic Blue, decorated the special edition with large camouflage elements and innovative color blocks to keep the contrast with the theme. Another striking thing about the design of the phone, the AAPE logo is positioned at the bottom of the back of the device. 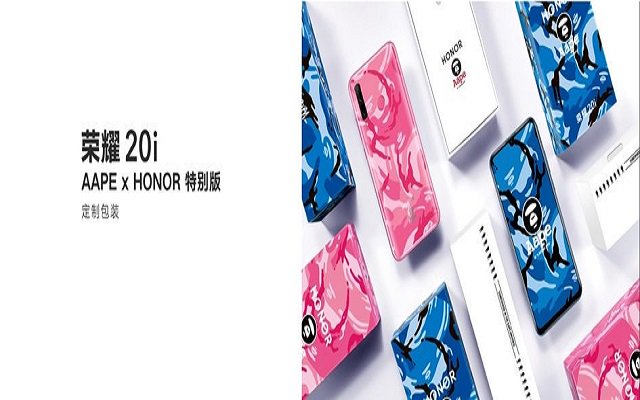 Advanced technology has been used in the design of Honor 20i AAPE x Special Edition, which comes with 6 GB RAM and 256 GB internal storage option. The boot animations, screen wallpapers and other UI elements of the device are designed to match the iconic elements of AAPE. This design, in which the company blends new technology and modern aesthetics, is called “HonorTechChic”.

Honor 20i AAPE Special Edition, which has a 6.21 inch Full HD +, IPS LCD screen, has a waterdrop-shaped notch. The screen-to-body ratio of the phone, which has a 19.5:9 aspect ratio, is 90 percent. This special edition, powered by the Huawei HiSilicon Kirin 710 processor, also offers Game Turbo 2.0 to its users for a gaming experience.

There are three cameras on the back of the phone: a 24 MP main sensor, 8 MP wide-angle lens and 2 MP depth sensor. The 32 MP selfie camera on the front comes with artificial intelligence beautification feature.

The storage and RAM combinations of the phone are as follows: