Biology Teacher Ahmet Can and Mathematics Teacher Sait Tüm, who work at 15 July Martyrs Anatolian High School in Hisarcık, Kütahya, together with their students Nilgül Türkaslan, Havva Studyz, Ahmet Beler and Hamza Keleş, a completely domestic rocket to be exhibited at the Science Festival. they developed. Moreover, the first launch test of this developed rocket was successfully completed.

Mathematics Teacher Sait Tüm, who is part of the team that carried out the project, said about the rocket they developed, “Even though it seemed impossible at first, we realized that we could achieve the rocket project after both the students’ explanations and the videos we watched.” Biology Teacher Ahmet Can said, “When our Headmaster, Mustafa Şahin, stated that he would support the Rocket Project, we rolled up our sleeves. We named the rocket “MS1” because of our manager’s contribution to our project. It was a successful launch on the first try. We hope that we will achieve this success in the Science Festival as well. Our goal is to show students that they can achieve something. 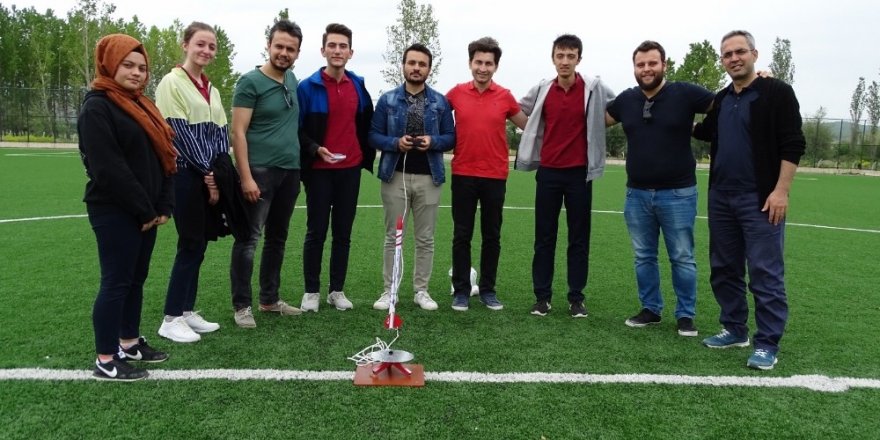 With this engine, the rocket can go up to about 150-200 meters. There is a hidden parachute inside, when it reaches the top, a fire rises from the tip of the engine and the parachute opens, preventing the rocket from being damaged during its fall to the ground. In this way, we have the opportunity to use the rocket again. The rocket’s ignition system is fully electronic and remotely fired. As soon as we give electricity to the fuse we have connected to the bottom, the rocket engine inside is ignited and the rocket goes up and goes down again. We do not have a chance to manufacture the wick and ignition engine as there are flammable chemicals in us. So we had to get them ready. The rest of the mechanism is all ours.” he said.

School Principal Mustafa Şahin, who is the father of the rocket named MŞ1, said, “In order to exhibit more different projects at the Hisarcık Science Festival, my teacher friends exchanged ideas with the students and they decided to make a rocket. As the school administration, we gladly accepted and provided them with the necessary support. In the end, it turned out to be a beautiful project. It is a great honor for me to name the rocket they designed after me. I think that the rocket project will be beneficial for young people to open their horizons, realize their goals and show their skills. Our aim is to enable our young people to produce something on their own and to realize what they can produce. Hopefully we can do that.” said.

You can watch the images of the rocket launch moment developed by the students right below.