Although every day is for them, we have officially come to the day of the year reserved for them, our mothers. It should not be overlooked that, like everyone else, game characters also have mothers. Unfortunately, the mothers in the games were the elements used only to reflect the background story of the main characters. However, we still wanted to bring together the best of them for you:

(Let’s warn you before you start reading, some parts of our article may contain spoilers.)

It is very difficult to raise a child while on duty and unfortunately the situation is the same for Ana, one of the main characters of Overwatch. Despite being an elite soldier, Ana is still a mother. Fareeha’s mother, who grew up with her as a complete role model. Unfortunately, it is this sense of admiration that comes between them because Ana does not want her daughter to grow up like her.

Unfortunately, these two are unable to make up for themselves before Ana dies in battle. Or so everyone thought.

Actually, Ana is a playable character in Overwatch because she didn’t actually die in battle, but pretended to be dead. Fareeha also learned that her mother was alive and, ironically, their relationship grew stronger after her mother’s ‘death’. 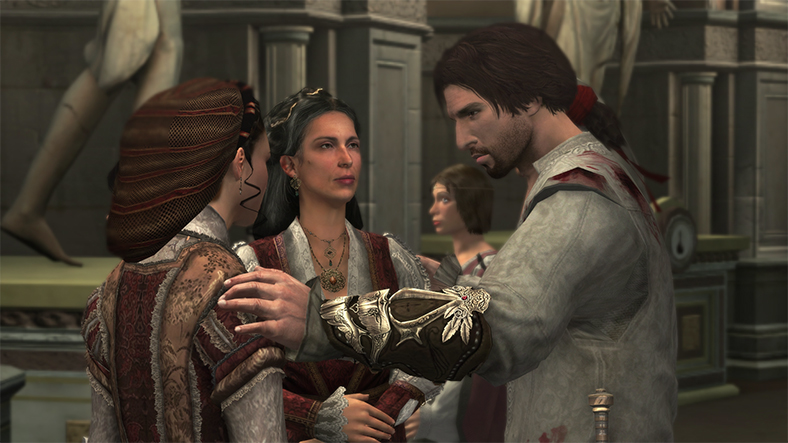 Almost all of us are Ezio Auditore, who made the Assassin’s Creed series what it is today. we know. However, we do not know much about the life of Ezio’s mother, Maria, whose life we ​​witnessed from her birth to her death. Always with her children, Maria’s life was going well until the wrongful execution of her two sons and her husband.

Maria was left with only her daughter Claudia and her middle son Ezio. After this unfortunate event, Maria suffered a kind of paralysis and stopped speaking a word. Ezio, Maria, and Claduia joined Mario Auditore as his son Ezio assumed the title of assassin, inherited from his father.

The youngest child, Petruccio, was collecting feathers before he died. Knowing this, Maria collected the feathers that Petruccio had collected in a box. In fact, when you collect all the remaining bird feathers in the game, you get a cape that you can use in the game. As a result, Maria began to speak again.

Ezio, who went to start a revolution in Rome after years, easily handled all his affairs thanks to the kurtizan information network his mother established. So even though she suffered so many losses, Maria never gave up on Ezio and Claudia.

Not all mothers are perfect. Tenenbaum was the one who gave life to the younger sisters, but after a while he began to regret causing it himself. To make up for his mistakes, he eventually teamed up with Jack (depending on how the actor treated the younger sisters) to save the sisters.

What makes Tenenbaum such a good mother is that she notices the lines she’s making and wants to make up for them. Being a parent is not an easy thing, but the important thing is not to give up. That’s why Tenenbaum is also on our list.

We said for Tenenbaum that not all mothers are perfect, and so is Samara. Samara is a mother devoted to catching her daughter Morinth. This is because Morinth carries a deadly gene that will cause the death of every person she is with.

It’s kind of Samara’s fault that her daughter is like this. Samara has been with someone in the past who would pass on this gene to her. Although they have mutated, Samara continues to love her child the same way because she accepts them as they are. She wants not only to protect the universe from her daughter, but also to protect her from herself.

God of War has a strange relationship with mothers. Although Faye is the driving force of the story, she dies before the game begins. The other mother, Freya, plays a larger role in the story. Freya is one of the first allies Kratos and Atreus encounter, and the strongest. She is also a god, the mother of the god who will come after Kratos, and the ex-wife of the king god Odin. So Freya is much more than just the ‘Witch of the Forest’ title.

There is a point in the story where we can describe Freya as a true ‘mother’. Freya is the one who makes Baldur feel nothing. When Kratos kills Baldur at the end of the game, Freya swears revenge. So while Kratos and Atreus are currently dealing with Thor, Odin and Ragnarok, Freya joins them.

For a mother, a son is still a son no matter what he does. We also see in the mothers we mentioned that no matter what their children do or experience, these mothers have always stood by and helped them. So whatever you do, remember that your mother is with you. Happy Mother’s Day to all our mothers 🙂