An older brand than most people think, Apple’s history goes back much further than the iPhone. Apple’s first computer was the Apple I.

Christie’s Auction auction house sold a 1976 Apple I, hand-built by Apple co-founder Steve Wozniak himself, for £371,260, or roughly $471k. The computer was sold in a leather case and with an integrated keyboard. 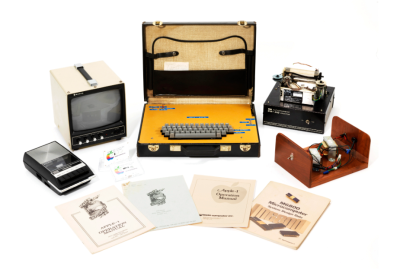 The reason why the computer is sold in a bag is that the Apple I does not have its own bag. It was entirely up to you how to carry the device that you can connect to the TV and use. One of the previous owners of the product probably placed the machine in a bag so that it would be easy to carry and collect.

It is thought that approximately 200 Apple I were produced and most of these computers were destroyed. The item in this auction was previously owned by Rick Conte. Conte later donated the device to the Maine Personal Computer Museum, which later fell into the hands of a number of other owners.

The original manual, articles about the Apple I, equipment such as a compatible printer were also included in the auction.