Between 2014 and 2016, ESA’s Rosetta spacecraft, on which the scientific camera system OSIRIS is aboard, took 70,000 photos of comet 67P/Churyumov-Gerasimenko. The photographs not only documented the most extensive and demanding comet mission, but also showed the duck-like shape of the celestial body. In a joint project between the Department of Information and Communications at the University of Applied Sciences Flensburg and the Max Planck Institute for Solar System Studies (MPS), the OSIRIS team leader has released all the photos. OSIRIS Image Viewer meets everyone’s needs. It also provides easy and fast access to one of the greatest scientific treasures of recent years.

Comet 67P/Churyumov-Gerasimenko was first photographed by the OSIRIS camera system in March 2014 from a distance of almost 5 million kilometers. The final image was taken on September 30, 2016, just minutes before the spacecraft landed on the comet. At this time, there was only 20 meters between the spacecraft and the comet’s stony surface. Between these two images lies a long adventure: the first-ever space mission to accompany and closely observe a comet along its path through the Inner Solar System. 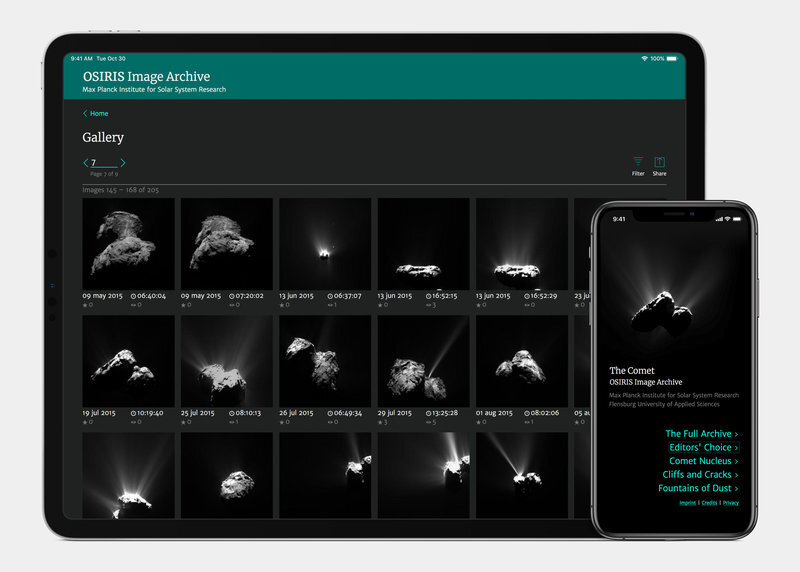 This adventure can now be tracked again thanks to the OSIRIS Image Viewer. While browsing the archive, users will be able to view images from Philae’s descent, dust displays, and perihelion transit as Rosetta approaches the comet. The photos also show the search for the landing site for Philae in the mission’s final weeks. In addition to the spectacular eruptions of dust and gas around the comet’s core, the images show rugged hills, strange cracks and valleys, flat plains and rock-filled areas.

MPS scientist and OSIRIS principal investigator Dr. Holger Sierks said: “It’s important to us that this treasured collection of data is publicly accessible. No prior knowledge is required,” MPS scientists designed the viewer so that all photos and additional information can be found quickly. Each of the nearly 70,000 photos includes the date they were taken, the distance to the star and a short text, and the photos can be downloaded in full resolution. For users who want to do deeper research or use the archive for scientific purposes, the photos are also available in scientific data format. In addition, information about the filters used, focal length and exposure time are presented with the photos.