Capturing a rapid exit with its Zen architecture, AMD managed to get a good position against its rival Intel on both desktop and mobile platforms. A few weeks ago AMD released a new roadmap and we got an overview of future Ryzen CPUs. The Reds are ready for the Zen 4 architecture and will make their first move with the Ryzen 7000 “Raphael” desktop processors. This architecture will also be used in laptops in the future.

While AMD is busy shrinking the Raphael for mobile, it is preparing the Dragon Range family for top performance. These processors are redesigned for the mobile BGA socket. Thus, 16-core Intel Alder Lake-HX processors will not be unrivaled. As a reminder, in such chips we can see more powerful CPUs at the expense of fewer GPU cores.

The Dragon Range series is designed for enthusiast class high-end laptops that fall into the “Enthusiast Gaming” category. Almost all such laptops have a discrete GPU, so RDNA 2 graphics are hardly necessary for gaming. 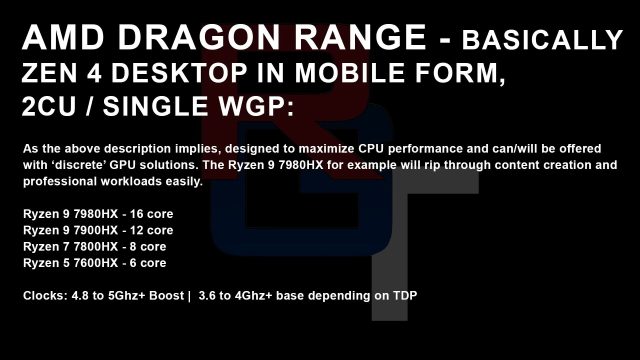 According to Red Gaming Tech, at least four new APUs should be expected. The flagship Ryzen 9 7980HX will be a milestone for AMD, increasing the CPU core count to 16. Its sibling, the 7900HX, will still be part of the Ryzen 9 series, but with 12 cores. The 8-core and 6-core 7800HX and 7600HX models will compete in the middle class. All APUs will also come with the RDNA 2 Compute Unit.

Phoenix Point mobile processors target the 35-45W power range, while it was developed for thin and light gaming laptops. The source of the leak has once again confirmed that this series will have RDNA 3 graphics architecture. In addition, APUs codenamed Phoenix will offer powerful graphics performance with 6 times more CU (12 CU-6 WGP) than Dragon Range. 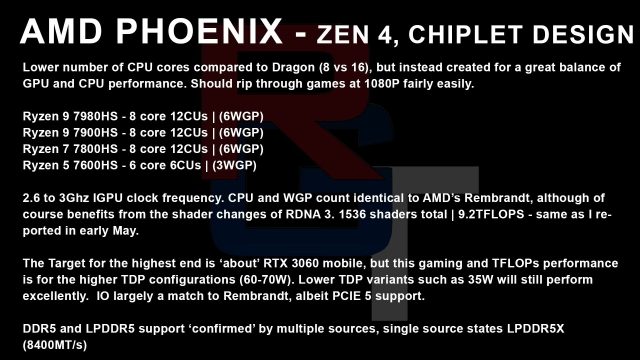 Four SKUs are expected in the Phoenix Point lineup, namely Ryzen 9 7980HS, 7900HS, Ryzen 7 7800HS and Ryzen 5 7600HS. Models codenamed “HS” will have exactly the same number of cores as the current Ryzen 6000 “Rembrandt” but will be powered by newer CPU and GPU architectures.