Home İnternet Unblocked Version of Wikipedia is Shutting Down

Wikipedia is the focus of important discussions not only in Turkey but also all over the world from time to time. User-controlled data entry and digital encyclopedia logic still have millions of users.

There was more than one way to access Wikipedia, which was closed in our country on April 29, 2017. Although the most popular choice is generally for VPN services, VPN was not a solution for users who care about digital security. The WikiZero platform, which was put into service by the Wikimedia Foundation in 2013, was also put into service for Turkey.

WikiZero service offered the opportunity to access Turkish Wikipedia via www.wikizero.biz link. In fact, the “We Miss!” on the Wikipedia logo in this version, referring to the blocking. His writing was also noteworthy.

To access the WikiZero version, it was enough to add a “0” to the URL link of any Wikipedia article:

After this process, you would automatically access the WikiZero version of the article with the same content as Wikipedia.

The last statement made by the WikiZero team of the Wikimedia Foundation is as follows: 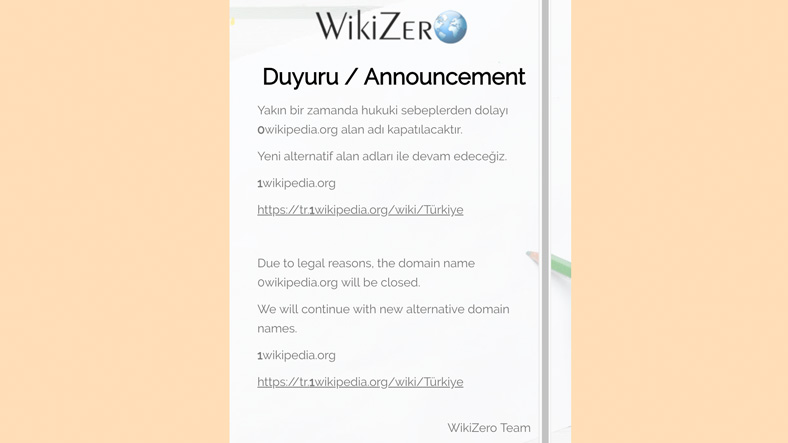 It is not clear when Wikipedia will be reopened in Turkey. It was requested that Wikipedia’s problematic articles be rearranged in this regard. The ban was not lifted when the articles and contents were not regulated. It was deemed worthy of the Interactive Award at the SXSW fair held in 2013, when it was put into service.