Home Other What are the Benefits of SSD? Here are 5 SSD Advantages

Hard drives have served us for many years and still find their way into most of our systems. With the decrease in costs, the number of users who use only SSDs and put HDDs on the shelf continues to increase day by day. After solid state drives entered our lives, they changed many things and brought us countless benefits.

If you’ve bought a new portable laptop in the last few years, you’re likely using an SSD as your primary boot drive. On the other hand, if you have recently assembled a desktop system, you must have bought at least one SSD.

You may still be having a hard time choosing between HDD or SSD. Now let’s briefly touch on the differences between SSDs and HDDs. In particular, we will focus more on the benefits of SSDs here.

Traditional hard drives are used as the basic permanent storage unit in a computer. So unlike the data stored in RAM, the data doesn’t fly away when you shut down the system. HDDs, as you know, have a magnetically coated metal plate that stores your data. The read/write head is used to access data while the platters are rotating. So we’re talking about a purely mechanical system.

An SSD performs the same basic function as a hard drive, but all information is stored in interconnected flash memory chips that preserve data even when there is no power flow. These flash chips (often called “NAND”) are a different type from the type used in USB flash drives and are generally faster and more reliable. As a result, SSDs are more expensive than USB flash drives of the same capacity.

SSDs are generally much smaller than HDDs and thus provide a lot of flexibility when building systems. We can use them in traditional 2.5 inch or 3.5 inch hard drive bays (SATA). On the other hand, it is possible to install drives known as “M.2” into a PCI Express expansion slot on the motherboard. In this way, cable clutter is also reduced.

Let’s quickly talk about the advantages offered by SSDs.

As a result, we can safely say that solid-state drives are more resistant to drops, accidents, wear and tear, as they do not have small, vulnerable parts. If you drop your laptop and the SSD is installed, your screen will probably break before the SSD. If you are not careful about transportation in general, you should definitely choose an SSD.

This is exactly where SSDs shine. An SSD-equipped computer boots up in less than a minute, often just seconds. With HDDs, these times are many times higher. On the other hand, your hard drive will continue to be slower than the SSD in every scenario you use the system.

A PC or Mac with an SSD can boot faster, launch and run applications faster, and transfer files faster. Whether you’re using your computer for entertainment, school or work, you’ll feel the difference with SSD in any situation.

Magnetic disks have one major drawback. Because of their rotating recording surface, hard drives work better with larger files arranged in contiguous blocks. It can start and end the drive head reading in one continuous motion. When hard drives start to fill up, large chunks of files scatter around the disk platter and data begins to fragment. Although read/write algorithms minimize this negative effect, reading files on hard drives progresses with a slower process due to their nature. With SSDs, data can be stored anywhere on the drive and is easier to access. Naturally, solid state drives run much faster.

Since SSDs are lighter and smaller than hard drives, they are much easier to transport. In addition, since it is more resistant to falling and hitting with its solid structure, you can easily carry it with you.

Because hard drives rely on spinning platters, there is a certain limit to which the product can shrink. There were attempts years ago to develop smaller 1.8-inch hard drives, but these drives were stuck at 320GB. Smartphone manufacturers, on the other hand, use only flash memory for their primary storage.

SSDs have no such limitation, so they can keep getting smaller as time goes on. SATA SSDs are available in 2.5-inch sizes. On the other hand, products using M.2 connection (there are NVMe and SATA variants) continue to replace SATA connected SSDs. As you know, these drivers come in lengths such as 42mm, 60mm, 80mm and 120mm. 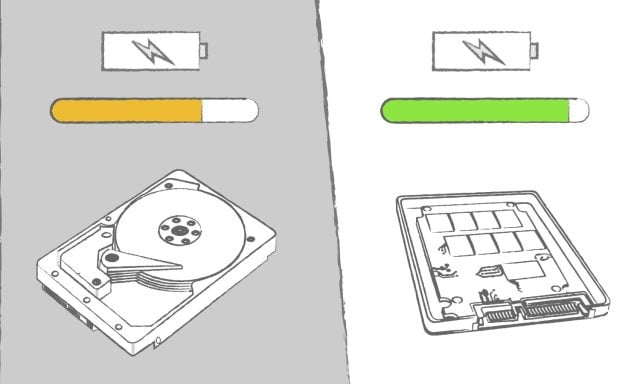 None of the energy consumed by the SSD is wasted as friction or noise, making them more efficient. In other words, regardless of desktop or servers, it contributes positively to the electricity bill. You can work longer on a laptop or tablet.

We can easily mount SSDs with a screwdriver. It’s also a little more effortless to install products that come in the M.2 form factor.

Solid state drives are defined by three form factors. These are: the size of the drive, the type of connection interface, and the physical space the drive will occupy on the computer.

The standard form factor for an SSD is 2.5 inches, which fits in the drive bay of most laptops or desktops. As many users have replaced their hard drives with solid state drives, the 2.5 inch drive has become the standard for all HDDs and SSDs. It was designed to make the transition to a higher-performance drive as easy as possible by minimizing the need to replace interfacing cables.

mSATA SSDs are small in size compared to SATA. mSATA is one-eighth the size of a 2.5-inch drive and can be plugged into the mSATA socket on the motherboard. mSATA drives are used as secondary drives in ultra-thin and mini devices or desktop computers.

It is the smallest form factor for SSDs. While it is plugged into the motherboard via the M.2 interface, it is also possible to use it in PCIe slots thanks to some adapters. You can see M.2 SSDs in all areas, but they are perfect for small tablets and laptops.

As a result, SSDs have numerous advantages. Solid state drives provide faster load times for games, apps and movies. However, when used for business purposes, it can shorten working hours and make your work easier.

In fact, there is only one downside: prices. Although SSD prices keep getting cheaper day by day, they are still behind HDDs in terms of price/capacity ratio. However, let’s end our words by saying that there should be at least one SSD in every computer right now.