Without the overdrive feature, LCD monitors may face ghosting problems. Ghosting occurs due to asymmetrical speeds in pixel transitions. LCD pixels generally provide a faster transition to a particular color. This causes unwanted motion effects between the forward end and the rear end of moving objects on the screen.

For Overdrive, Asus uses “Trace Free”, Benq uses “AMA”, Acer uses “Overdrive”. Below you can see the ghosting effect that occurs at the minimum overdrive setting. 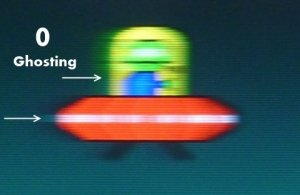 You can see the halo of light formed at the maximum overdrive setting in the picture below. 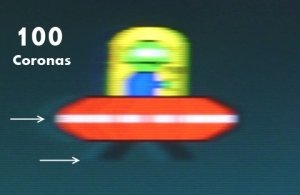 It is possible to understand the difference between the overdrive values ​​from the pictures below.

At Asus TraceFree 0, ghosting can be seen especially prominently on the left side of the UFO dome.

It is still possible to see the ghosting on the left side of the Asus TraceFree 20 UFO dome and hull.

With Asus TraceFree 40, ghosting is almost gone. A subtle white shading can be seen on the body of the UFO.

With Asus TraceFree 60, ghosting is completely gone. A small halo of light can be seen on the left edge of the UFO body.

It is possible to see the Asus TraceFree 80 value halo more clearly.

At the Asus TraceFree value of 100, the halo of light is fully visible.

To summarize, ASUS monitors with “Trace Free” feature Trace Free 60, you can achieve the best balance between ghosting and light halo.

Another way to reduce ghosting and halo formation is to use faster LCD monitors. (120 Hz, 144 Hz, 240 Hz) In addition, it is possible to reduce these effects with LCD monitors with special backlight such as ULMB or LightBoost. In this type of lighting, the background is turned off between transitions and motion blur is also reduced.

Different monitors and refresh rates may have different overdrive effect. To observe the effects of motion, manufacturers use expensive tracking cameras. However, to test on your monitor without the need for these cameras. this linkyou can use.